With Day Of The Dead - Book I, Gaza, Dan Gordon has created a new genre of fiction. Not Sci -Fi, but Terror-Fi. Soon to be a major motion picture, Day of The Dead is the year's "must read". 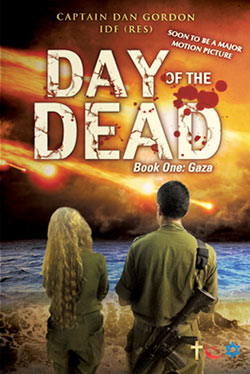 In 2009 Hamas began digging a secret network of 40 terrorist attack tunnels from Gaza deep into Israel. The object: kill, maim and take hostage as many Israeli men, women and children as possible, and achieve a "Divine Victory" over the Zionist enemy.

At the same time, Iran, Hamas’s Godfather, fearing a possible US attack against their nuclear weapons program, told Hamas to cut a deal with the Cartels in Tijuana, Mexico. Make them an offer they can't refuse; build them the exact same network of 40 tunnels running from Tijuana to downtown San Diego. They can smuggle all the drugs they want on condition that should the need ever arise, Iran and Hamas can use them for a deadlier purpose.

Now in the summer of 2014, with the rise if ISIS and the wars in Syria and Iraq, Iran has cut Hamas off.

Hamas is dead broke and because of that decides to do two things; 1) start a war with Israel using the tunnels to win them a "Divine Victory" and billions in "reconstruction aid" from an ever gullible US administration and international community, and…2) strike a secret deal with ISIS to sell them their network of 40 terrorist attack/smuggling tunnels, that run from Mexico into downtown San Diego.

The objective?
Sink the Pacific Fleet at anchor in San Diego. Wipe out one half the US Navy Seal Force (since US military personnel are not allowed to carry weapons on US Military installations!), and... kill, maim and kidnap as many American women and children as possible, drag them back through the tunnels into underground cells in Tijuana, and execute them on YouTube in the worst terrorist attack in history; a combination of 9/11 and Pearl Harbor together.

And who will stop them? San Diego PD vs RPG's?
And does anyone think America's feckless President, Rafiq Kabilla will invade Mexico!?
It will be up to an ad hoc team made up of a Black, twenty year veteran, Navy Seal, a tormented Hispanic DEA agent, a drop dead gorgeous born again female CIA Agent (and Liberty University Alum), with her own tortured past, and an embittered American born Israeli raised, half Irish, half Jewish, Israeli Military Intel officer, to literally lead an underground battle in the tunnels beneath San Diego to save America from the worst terrorist attack in history.

A Tom Clancy-esque thriller, ripped from today's headlines. A tale of espionage, combat, terror, love and ultimately, of faith.

With Day Of The Dead - Book I, Gaza, Gordon has created a new genre of fiction. Not Sci-Fi, but Terror-Fi. Soon to be a major motion picture from the studio that produced Act of Valor, Day of The Dead is the year's "must read".

A Clarion wake up call to a Clear and Present Danger